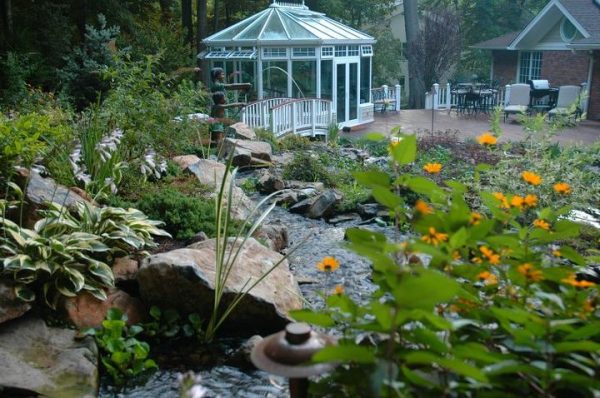 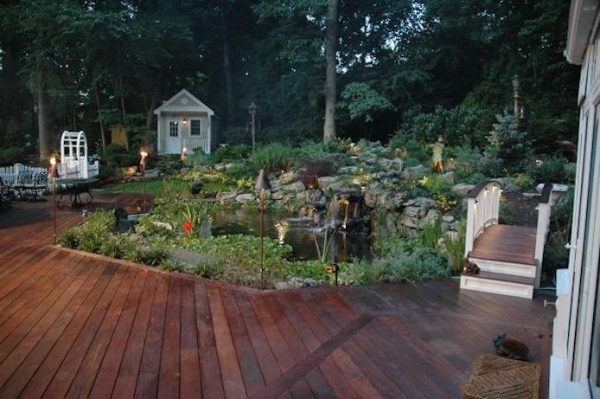 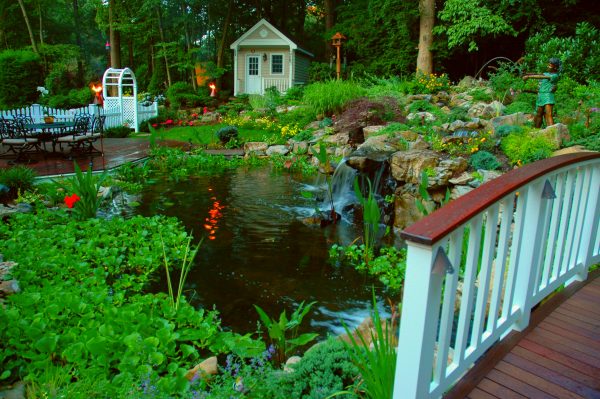 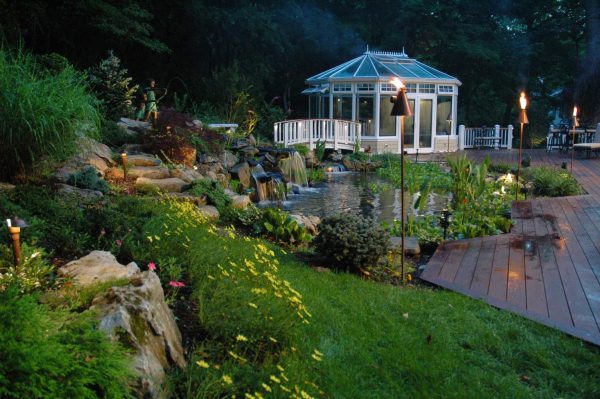 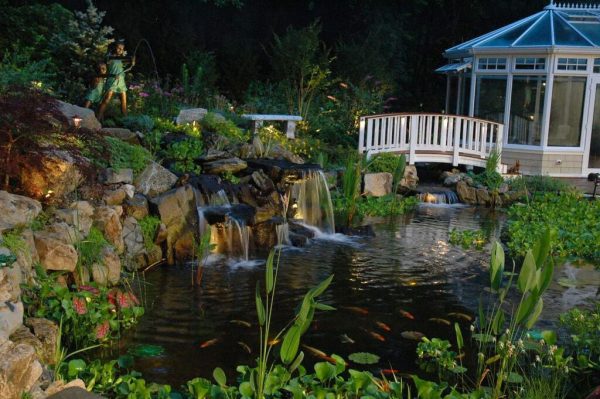 Get Ready for Summer with a Stone Bar and Trellis

These Long Island, NY, clients wanted to upgrade their backyard with lots of outdoor living amenities. But space was at a premium. There wasn’t room, for example, for a pond with waterfalls. Also, designing/adding a waterfall area to their new pool (something Deck and Patio is known for) would have reduced the desired patio space. 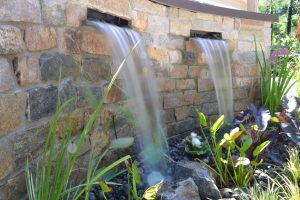 “So our design team came up with the idea of having two sheer descent waterfalls  flowing out of the stone outdoor bar they wanted,” says our own Dave Stockwell.

“We designed the waterfalls be be ‘pondless’ — so the spill is captured below ground without the usual above-ground presence of a pond.” 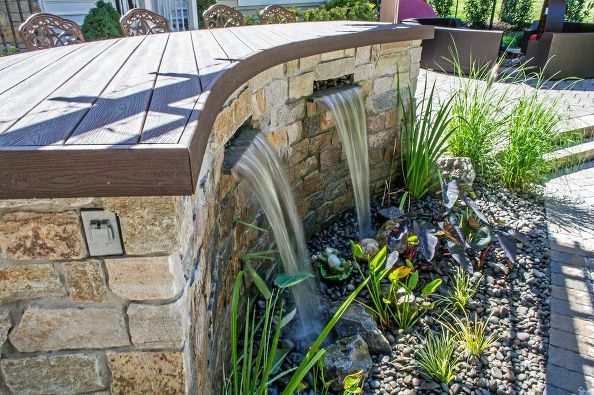 The best part of these waterfalls is their ability to offer the audio and visual enjoyments of continuous flowing water while using only a minimum of water flow. The Aquascape underground “pondless waterfall” system stores and recirculates the captured water through an underneath pump that sends the water up through a filter.

Note: The charming block of plantings in front of the bar provides a natural softscape that breaks up the surrounding hardscapes with bursts of color and softness. 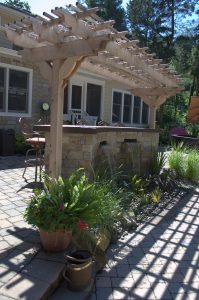 The addition of a custom wood trellis over the bar helped create an “outdoor great room” effect through the use of this attractive piece of architecture.

It also adds to the private escape feeling which is desirable anytime, but which is particularly valuable these days when travel is so unappealing to many.

Homeowners can add climbing roses or other climbing plants to such a trellis for additional natural beauty. And the shade from the pergola will increase over the years as the vines continue to grow. 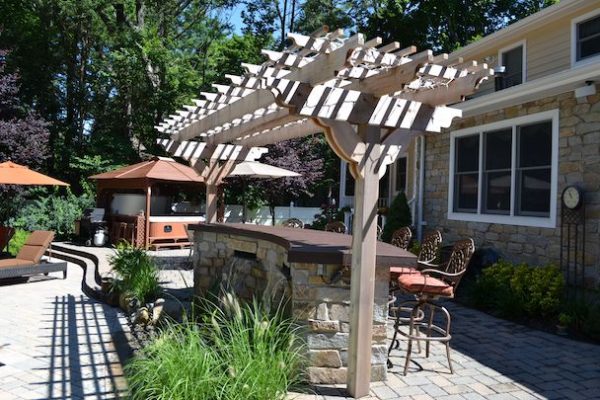 The custom bar with trellis was set across from a slightly raised patio lounge area furnished with circular wicker seating and a shade umbrella.

The bar’s stone mimics the lovely patio paving stones; it is topped by a counter made from composite decking material that gives the appearance of wood, but without the cracking, rotting, or splitting.  This countertop also requires no sealants because the composite materials are already protected from UV rays, and is very resistant to damage from insects, water or sun.

A note about the Cambridge Random Pavers used in this project. 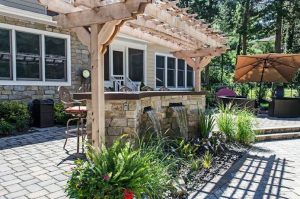 To create the patio pool surround and other patio areas, we compacted the soil back around the pool to allow for the immediate installation of the new pavers around the pool.

This compacting process is not done by many contractors. We, however, have been doing it successfully for over 15 years with little or no soil movement.

The idea is that, using compacted soil, the base will not settle so you don’t have to wait to install a patio around a new pool. Many contractors still install concrete slabs under their patio. In our experience we find this does not work well. Settling still occurs under the slab allowing the patio to crack or settle.

After the base materials were finished, we installed chestnut-hued durable pavers. The pavers’ protective coating means these clients will have a clean-lined modern look. Even after being subjected to snow plowing, de-icing salts and normal wear, they will keep their color and beautiful appearance. 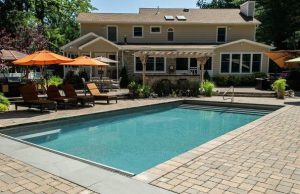 The Backyard Sanctuary You Always Wanted 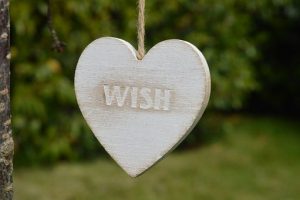 Have you been wanting a backyard sanctuary but don’t know what to do first? Sometimes, the best way to begin is to create a wish list.

That’s what these Deck and Patio clients did. This is what they wanted for their outdoor sanctuary: 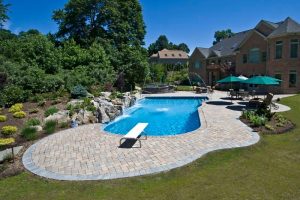 That’s what these Deck and Patio clients did. This was their list for an outdoor sanctuary:

— serene streams and waterfalls, and

— high-tech/energy-efficient pool components that are undetectable in the landscape.

“We were happy to assure them that we could bring together all the expertise necessary and design and organize it all,” says Deck and Patio’s Dave Stockwell. “In fact, incorporating outdoor technology with all the mechanics well hidden in beautiful settings fit right into our wheelhouse. It’s one of our trademarks.”

The water in a pool is often around 85 or 90 degrees, while the surrounding soil is considerably cooler. Adding insulation around the outside of the pool wall, as we did for this project, creates a thermal break between the warm water and the soil that really saves energy by helping the pool water to retain its warmth.

We worked with the owners to find energy-efficient solutions for the whole project. There are many ways to increase efficiency:

To heat the pool, we added a hybrid system that uses both a gas heater and an electric heat pump. The heat pump acts like a reverse air conditioner, pulling in warmth from the air and transferring it into the pool. This design not only adds heat taken from the air — and not from electricity — but the gas heater can act as back up when the air temperature is very low or when creating heat more quickly is required.

The “variable speed pump” is an extremely efficient pump that allows low energy use by slowing down the motor dramatically. It decreases the amount of energy the pump uses. It can run twenty-four-seven much more efficiently than others pumps that are used only a few hours a day.

Raising and lowering the speed of the pump is programmed by computer and they can control when it turns on and off. The computer will also monitor the chemical levels in the pool and decrease or increase them as required. 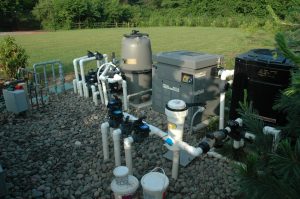 Deck and Patio hid the pool equipment away, up a delightful pathway, behind the waterfalls.

We designed and built the streams and waterfalls to flow through berm with moss rock. The gentle sounds of two streams leading to two separate waterfalls, as well as the splash of jet sprays, screen out any sounds from high-tech pool equipment. 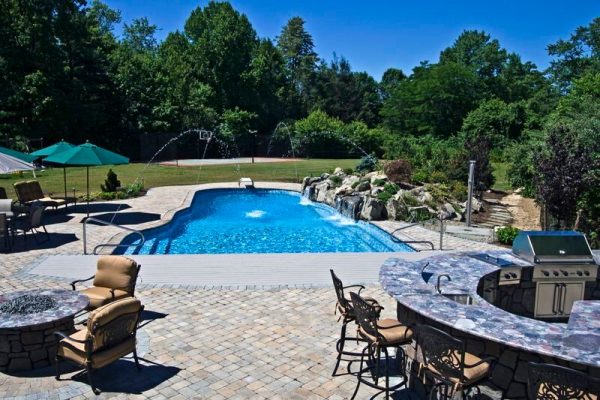 This serene backyard sanctuary gives no hint of high-tech energy efficient components supporting it all. The sounds of waterfalls, streams and sprays add tranquility to backyard retreat.

An outdoor shower stands at base of stepping stone pathway (right) that leads up to pool equipment. 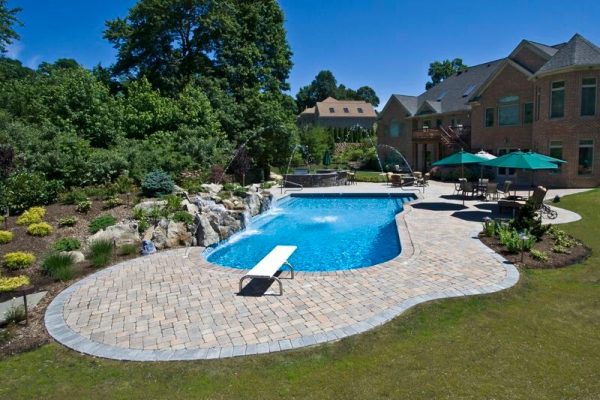 With vinyl pools you can also change a staircase, add a bench or swim-out, change the coping, and of course change your old liner.

Liner color choices are almost limitless and it is amazing what a new liner does to an old faded pool as seen in this photo. There are even pebbled colored liners in a tan tone that make them look more like a gunite pool. 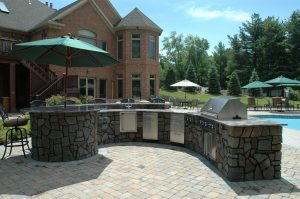 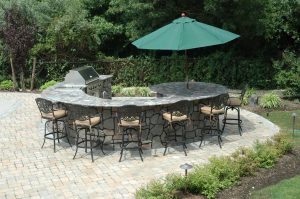