Ever notice how every few scrolls on Twitter, etc. will show a delightful bird, a funny squirrel, someone saving a desperate animal, a croaking frog, or lovely vistas — all squeezed in between posts of angst and politics?

Well. As helpful as these momentary breaks online are, the best break is enjoying nature close up, away from our phones. As Diane Sawyer’s Report: ‘ScreenTime’ showed a few nights ago, families are challenged today. They’re spending too much time with technology. And most, deep down, hunger for more family-time and time outdoors.

Ms. Sawyer’s report reminded us of a very special Deck and Patio backyard natural retreat we did several years ago. The wife contacted us saying she always loved birds but hadn’t seen many in her yard in a long time. She was also hungering to see butterflies, etc. Could we come up with a plan to bring nature alive on their property?

It soon became clear they wanted something truly special. They had already contacted other companies to provide them with a backyard conservatory and charming wooden bridge. Our challenge was to ensure we incorporated these into our own landscaping design in a harmonious way.

“The multi-feature natural retreat we proposed and built included a deck to overhang a new backyard pond — in such a way so that it looks like the pond continued under the deck,” says Deck and Patio’s Dave Stockwell. “In addition to these, our plan called for two 35-foot long babbling brooks, multiple waterfalls and lush multi-seasonal landscaping.”

To make it look as if Mother Nature designed this entire retreat, adds Dave, our team chose, for example, each rock and boulder carefully to create the right “water spills.” Sometimes a rock was chosen because of its crevices allowing for planting perennials within.

The homeowners were very involved in choosing the plants. In the end, we incorporated about 5,000 bulbs, almost 300 species of wooded plants, as well as evergreens, and about 150 varieties of perennials. 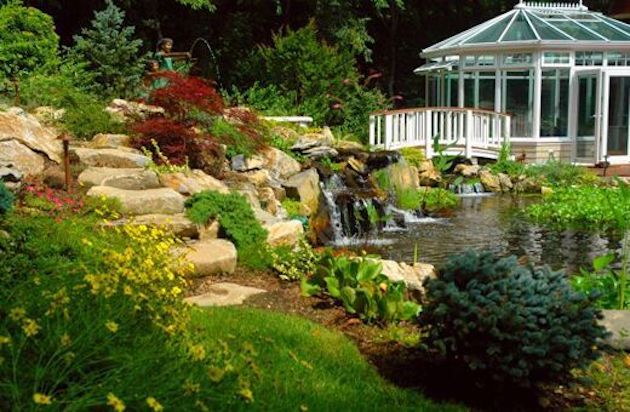 It was important to create a variety of different spaces and focal points, just like you experience in nature when you move about. In one place you sit next to the pond and observe the waterfall. Other times you’re walking through a wooded path. The lush landscape attracts a myriad of birds (and butterflies) so the sights and sounds of nature, along with the rushing water, are as relaxing an experience as is possible outdoors. 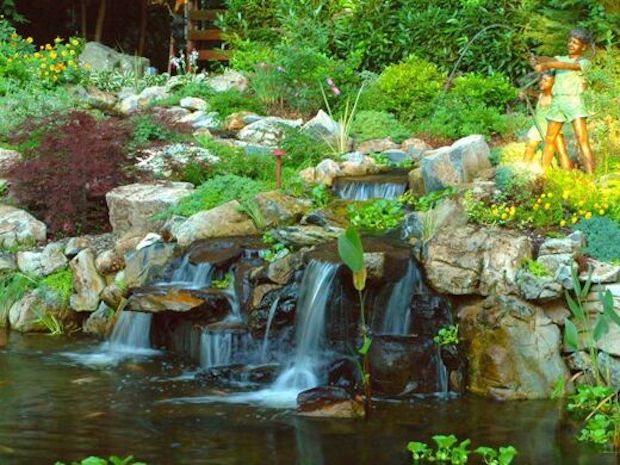 The rocks we used for the four-foot multi-tiered waterfall/pond came from farmers’ fields in New Jersey. Some weighed over three tons. Carefully placed, the scenes suggest one is trekking a natural preserve or wilderness.

Whether on their new deck, or in their glass conservatory, the family enjoys dining together al fresco to the sounds of birds and croaking frogs. When lounging outside, they can take a quiet moment to feed their koi.