The owner of True Blue Swimming Pools, Michael Truehart, was contracted to do the pool for this project. Much of the small backyard was sloping terrain, and the clients expected, as part of a new “natural-looking oasis that wows,’ that True Blue would build the pool on their only available flat piece of land.

“But Michael felt it was a pity to use up the flat piece of lawn where their children loved to play,” says Dave Stockwell, owner of Deck and Patio. “He suggested, instead, that the seemingly unusable elevated terrain be sculpted into the backyard retreat they wanted.”

This project would require a lot of creative landscaping, and Truehart recommended Deck and Patio be brought in help with the project.

“Manipulating grades — that is working within different levels— is one of the things we do very well,” says Bill Renter, who took the lead for Deck and Patio. “Such gradations can be not only attractive and spatially functional, but, when done correctly, they can make smaller yards appear considerably more expansive. We are also expert at creating natural retaining walls, which was key for this project.”

Bill adds that when he works within tight spaces, he makes sure the chaise lounge, dining and patio areas are all large enough for furniture, and have room enough to walk around. He also tries not to over-build or paver the whole space.

However, it wasn’t just elevation changes that presented problems.

“In order to fit a full-sized 24’ x 40’ pool, we also had to deal with stringent Town setback codes,” says Michael Truehart. “One way we addressed these problems was designing the pool on one side with an exposed wall. Boulder coping on the opposite side was expanded by Deck and Patio into a beautiful waterfall feature that also does double-duty as a natural retaining wall.”

The finished vinyl-lined pool has a concrete wall; extra rebar was added to the exposed pool wall for strength, and the concrete footing was sunk well below the frost line to prevent heaving and shifting. In addition to the waterfall area, throughout the retreat, smaller groups of boulders fitted with plantings act as natural and attractive retaining areas.

“Along with the finish work on the pool, including the Cambridge ledgestone veneer on the exposed wall, we also designed/built the Cambridge XL paver patio,” says Renter. “Our work, combined with True Blue’s beautiful pool, gave the clients what they wanted: a full oasis that “wows” — with a little unexpected space left over for their children to play.” 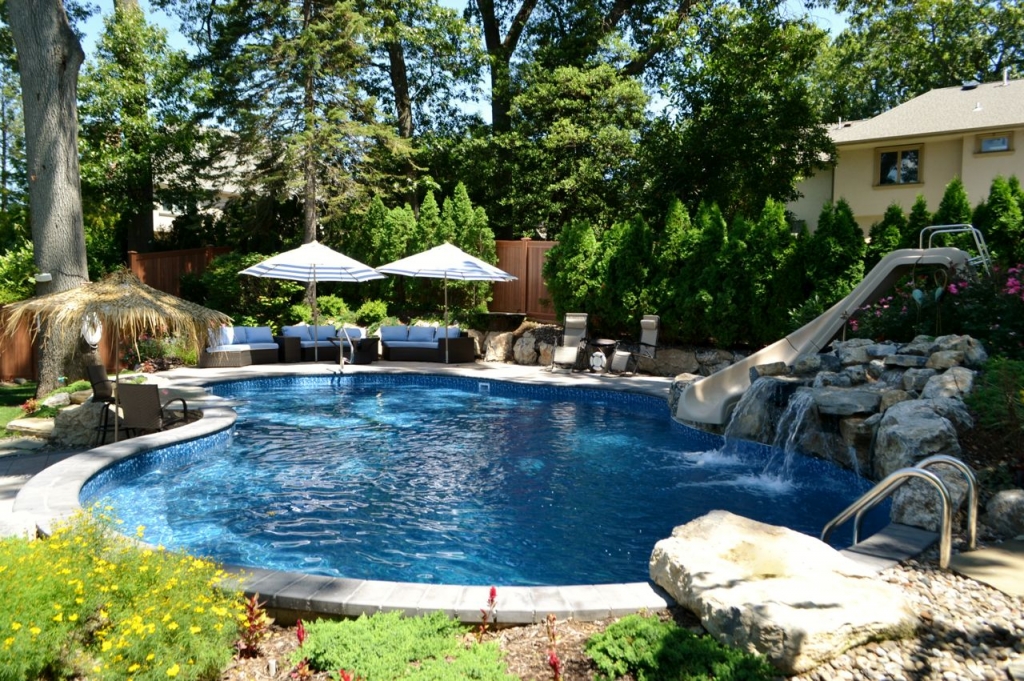 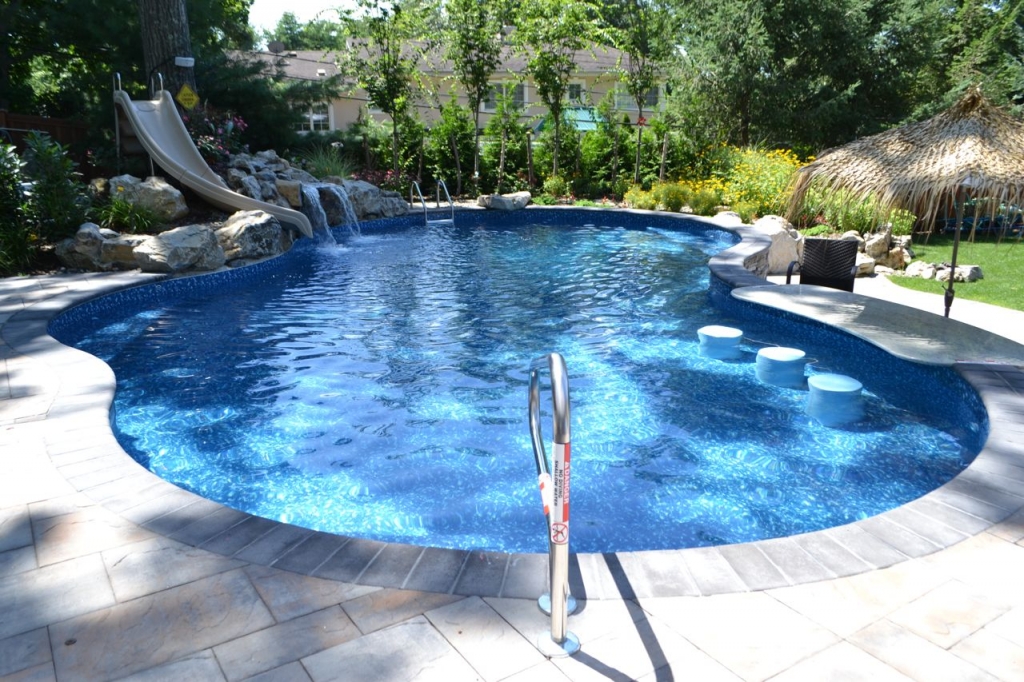 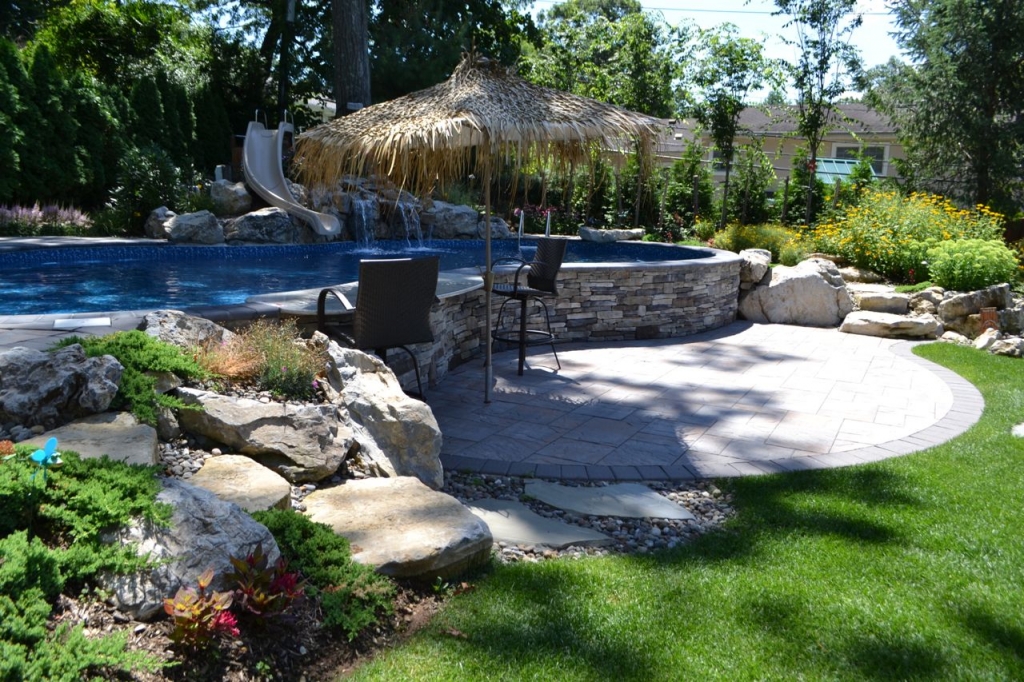 “One way we addressed the problems in using sloping terrain was designing the pool on one side with an exposed wall, which Deck and Patio veneered in Cambridge ledgestone,” says Michael Truehart of True Blue Pools. 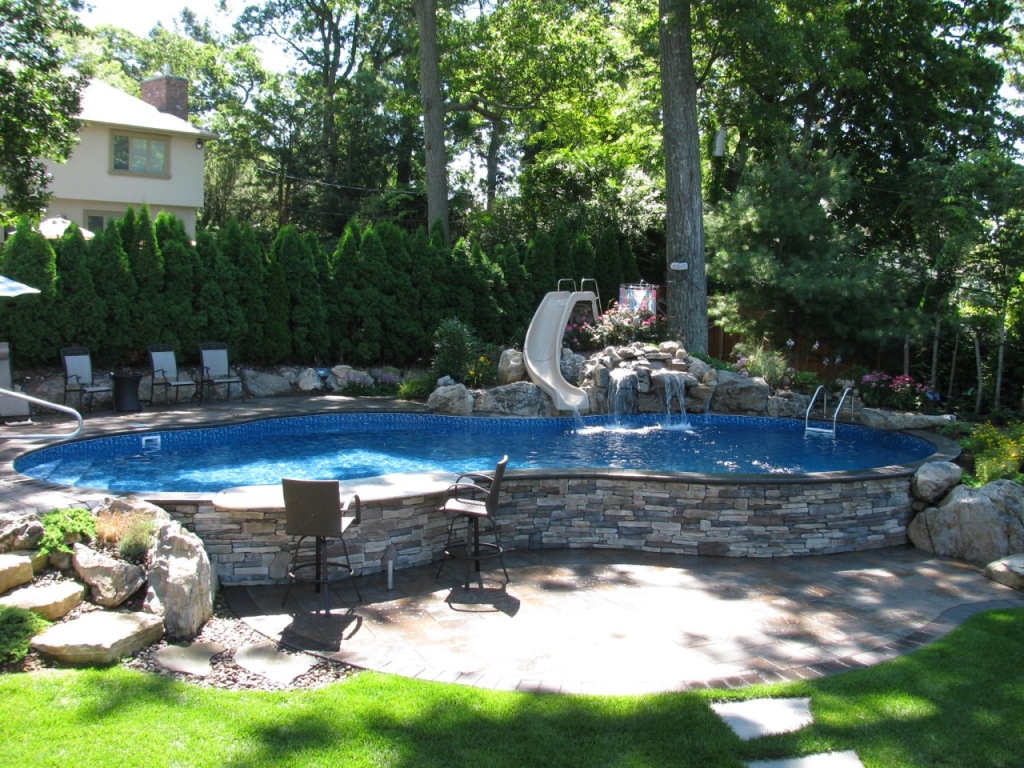 The pool’s vertical Cambridge ledgestone veneer adds drama to the lower patio area. Natural boulder steps (left) lead up to the pool surround’s main lounging area. Restful waterfalls running over moss rock (on the Wild Ride slide part of the pool) are not just beautiful to look at, they do double-duty as a retaining wall. 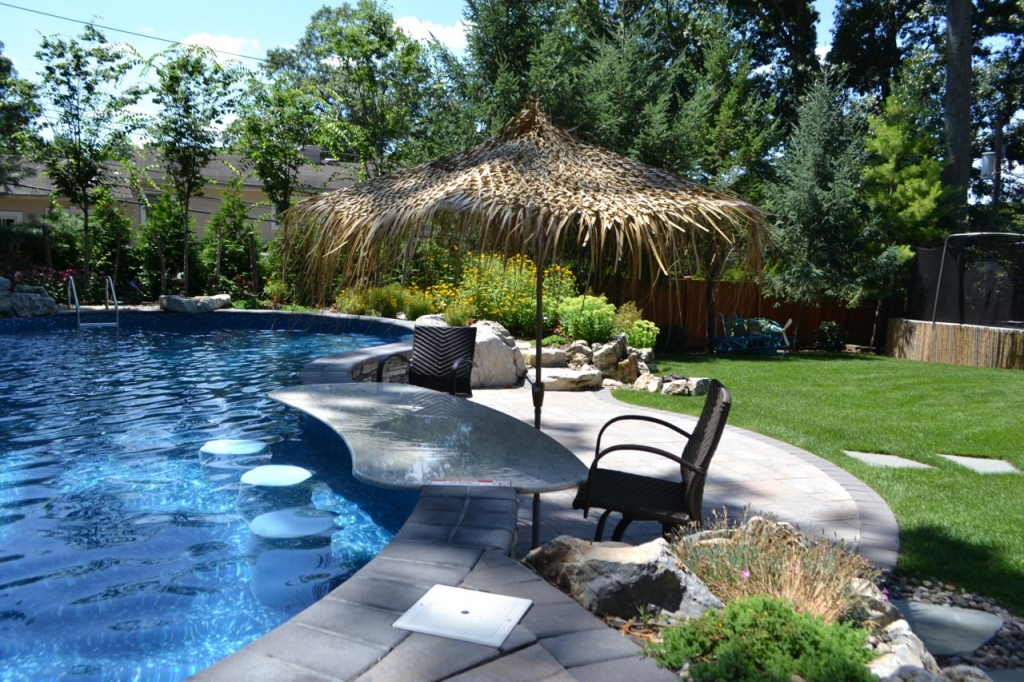 An impressive granite swim-up bar — with 3 vinyl-covered in-pool stools shaded by Tiki (Hula) patio umbrella — contribute to the “wow factor” the clients were looking for.