A Nashville, TN, family gets a new pool/spa with dramatic water feature — and the construction is all filmed by the DIY Network!

This past summer, Deck and Patio’s water feature team (Dave, Hector, José , Big John, Gerson), along with our friend at Best Hot Tubs, Bill Renter, appeared with Peek Pools and Spas on an episode of their popular series, Pool Kings (DIY Network).

The title of the episode, A Rocky Road to Backyard Bliss was inspired by the challenges Deck and Patio faced when lifting and positioning an enormous piece of rock.

“We had been subcontracted by the stars of this DIY Network series, Peek Pools and Spas, to join them in Nashville, Tennessee,” says Dave Stockwell, owner of Deck and Patio. “Our part was to build the swimming pool’s water feature. This included a grotto, meandering stream, three sets of waterfalls, flanking fire bowls, and an exciting fire feature for inside the pool.”

When Peek Pools and Spas was excavating the pool area, they hit a hard massive stone,” says Dave. “They had to keep digging and digging to dislodge it. To them, the massive rock was big a problem to be overcome. But when we spied it, we immediately said, ‘That’s our grotto rock!’ 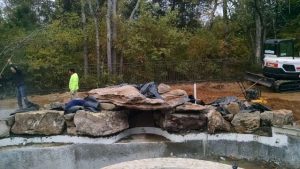 “Our friends at Pool Kings thought we were crazy, because it was so large. It wasn’t easy, but our team was persistent, even when the excavating machine’s chain snapped because the rock was so heavy.”

The ongoing challenge of getting that stone out of the ground and in place at the top of the grotto became a key element of the program. In fact, the DIY Network’s advertising for the episode referred to a “4,000 pound rocky start to the job.”

But as Dave and his team are quick to say, “not all gems are small.” Recognizing the value of a particular stone — even when it’s a massive two-ton rock — comes with experience. 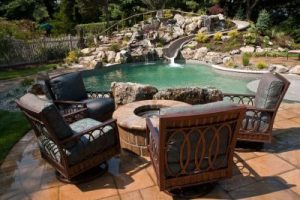 Deck and Patio certainly has water feature experience and has received many local, national and international awards for our Long Island water features.

In fact, it was one of our dramatic pool water features that drew the attention of Peek Pools several years ago. They were developing a special project for the DIY Network and, after seeing it, got in touch. They invited us down to Tennessee.

Since then, we have made additional trips there to assist them on other projects, with more opportunities planned for the future. 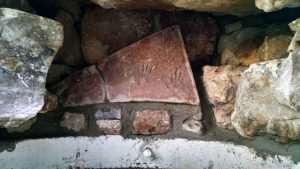 “Not all our rock choices for this project were large and problematic. We also found a very special piece for inside the grotto,” says Dave.

“It was a section of concrete from the homeowners’ remodeled patio that had handprints of their children. We recognized it to be a precious piece and fitted it as part of the grotto seat behind the pool’s waterfalls. That way, they’ll have it forever,” says Dave.

In addition to two fire bowls on either side of the stream and three waterfalls, Deck and Patio added a very special feature:

A natural gas flame, installed under the pool water, so it looks like water is on fire. 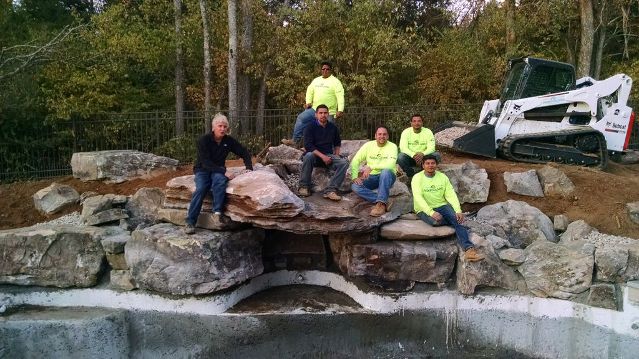 Positioning Swimming Pool Grotto Rock: This is a photo of our team after we finally got the two-ton grotto rock in place. 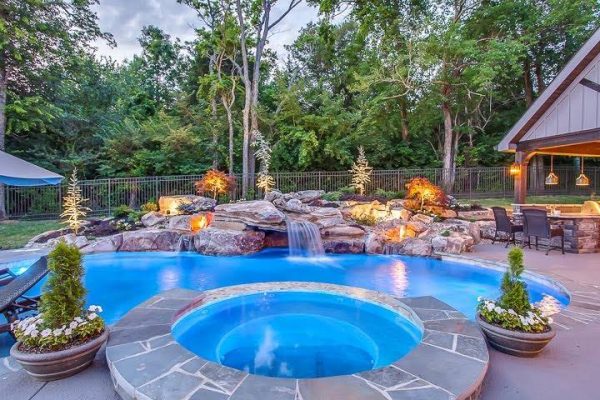 Completed Pool, Spa, and Water Feature for Pool Kings on DIY Network: For those not familiar with construction, it can be hard to imagine during the process what it will look like finished. But that’s what Deck and Patio and companies like Peek Pools and Spas are here for. It’s pretty spectacular finished, isn’t it?

Close Up of Pool Waterfalls: This is a close up of a part of the water feature we built for Pool Kings. At center, you see the main waterfall that runs over the front of the grotto. 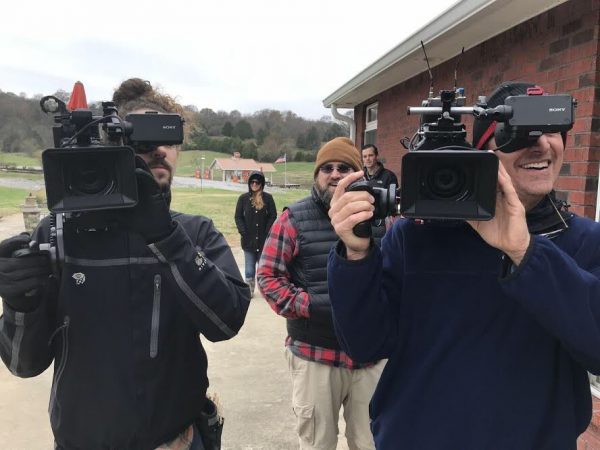 Filming Pool Kings for DIY Network: “One thing that’s amazing when doing one of these projects is how all the teams are working at once, plus you are being filmed every time you take a step,” adds Dave Stockwell. “It can be chaotic, but it’s thrilling.”