Swimming Pool Grotto Designs: Fun ‘Out’ of the Sun

Swimming Pool Grotto Designs: Fun ‘Out’ of the Sun

Children love a private escape. The youngest ones hide under a table, behind table cloths or chairs etc. However, even as adults, we still love our personal getaways. From man-caves to home gyms, we need moments spent in a quiet space.

One such escape may be the most delightful of all.

Truly, could there be a better hideaway than one you can swim to — say, behind a waterfall? And, what if behind that waterfall, there’s a hot tub, with hydrotherapy to massage you?

Well. That’s the possibility of a swimming pool grotto design. Grottos are usually constructed as part of an enlarged water feature. And it can be a delightful location for fun with friends and family, as well as a solo retreat.

Imagine. Being outdoors, but away from the heat of the sun. And, still close to all the happenings in the pool. Not to mention, that whether you are in the grotto or outside of it, you get to enjoy the stunning appearance and sounds of cascading water and the cooling mist such a waterfall will occasion.

1. Our first example of a Deck and Patio-designed grotto/water feature came about after Peek Pools and Spas invited us to travel to Nashville, TN, and participate in another episode of their popular TV series, Pool Kings on the DIY Network. (See large feature photo at top of this page for the complete project.)

While working on-site in Nashville, one major challenge was digging/lifting out of the ground and then positioning an enormous 4,000-pound piece of rock to help form the grotto. Indeed, it was such a task that it caused Pool Kings/HGTV to title that episode: A Rocky Road to Backyard Bliss!

Close up of Nashville Project’s Waterfalls

“A two-ton rock isn’t an easy maneuver,” laughs our own Dave Stockwell.

“But the result was worth it. We knew it was just what was needed when we saw it, and it became part of this project’s water feature. The whole feature included the grotto cave, a meandering stream, three sets of waterfalls, flanking fire bowls and a fire feature for inside the pool.” 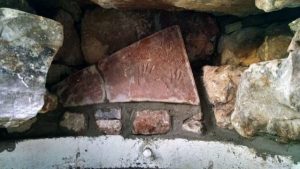 “Not all of our efforts there were so challenging,” adds Dave.

“In fact, while tearing out the old patio, we found a special piece of concrete. It had the handprints of the homeowner’s children. We knew right away it was a precious piece. While constructing the lotto, we ensured it had a place inside the grotto behind the pool’s waterfalls.”

2. The second grotto project we’re highlighting today was built in our own neck of the woods. 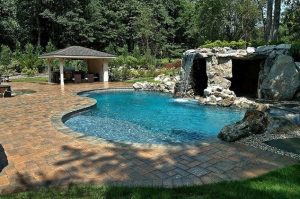 “It came to us as a referral,” says Dave. “The finished project boasts a free-form concrete pool, large grotto, water feature and spa. But it’s where the spa is placed that’s a special part of the design. The spa is actually hidden inside the grotto with the high waterfall cascading over it into the pool.

“We used large moss rock boulders to construct the grotto, supported by structural steel and concrete underneath,” says Dave. “We also added a tanning shelf in the shallow end of the pool that is large enough to accommodate lounge chairs.” 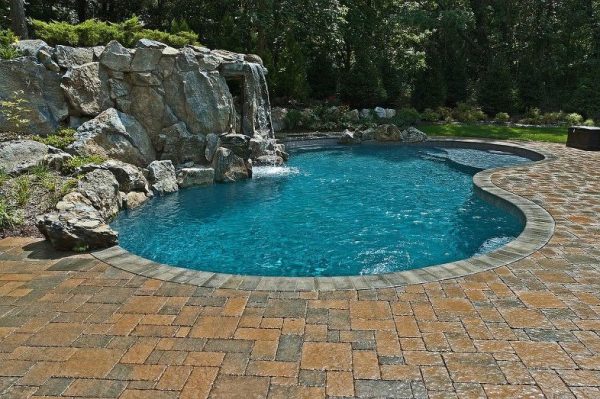 For this second project, the tanning shelf is directly across from the front of the grotto and waterfall. Not only can lounge chairs fit in the shallow water there, but it’s close enough to enjoy some of the mist occasioned by the falling water.

So it’s a great place to keep cool, but still be out in the sun. The pool is surrounded by a handsome Techo-Bloc tumbled paver patio and Deck and Patio landscaping. The entire project won us a prestigious Silver Medal from the Northeast Spa and Pool Association (NESPA). 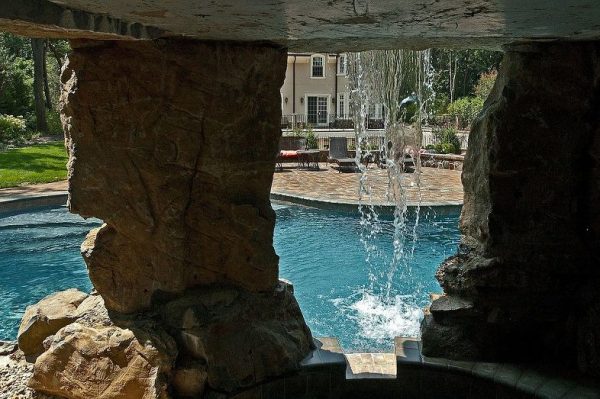 This is the view seen from inside the spa grotto. Note how private the spa is because it is nestled inside a cave made from moss rock boulders. The majestic high waterfall spills into the free-form concrete pool — just outside from where you have escaped from the heat of the sun.