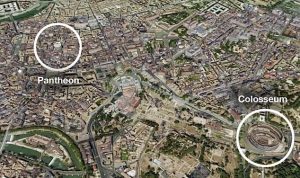 Complaints about outdoor noise date back to ancient Rome. And while no one today has to deal with the teaming hoards of Rome’s cart-traffic and congestion, many do live in modern sprawling cities, or perhaps simply near a busy intersection.

In the case of this project showcase, the homeowners’ longed for a restful backyard, but their property was located close to a highly-trafficked four-lane road. How could they enjoy a pool and spa amid disturbing noise?

“We were happy to reassure them that they could have an undisturbed backyard oasis,” says Deck and Patio’s owner, Dave Stockwell. “The key was including in the landscaping design a substantial rushing waterfall near the pool. It would not only be beautiful to look at, but it’s relaxing sounds would mask the more unpleasant street sounds.” (A short video that captures the sounds of their waterfall is posted below the first two photos.)

The project’s waterfall flows over a 19-foot sound barrier of natural moss rock boulders. “It includes a 4-foot-by-eight-foot ‘pondless’ waterfall between the wall and their new pool,” adds Dave. “The barrier with its rushing waterfall not only blocks out noise, but it also gives the impression one is vacationing on some south sea isle — away from everyday life.”

Deck and Patio surrounded the backyard retreat’s new freeform vinyl pool and raised spillover spa with handsome Cambridge Ledgestone patios and bright plantings. The raised spa has its own separate overhead waterfall as well as a spillover into the pool. All this adds to an undisturbed backyard experience. 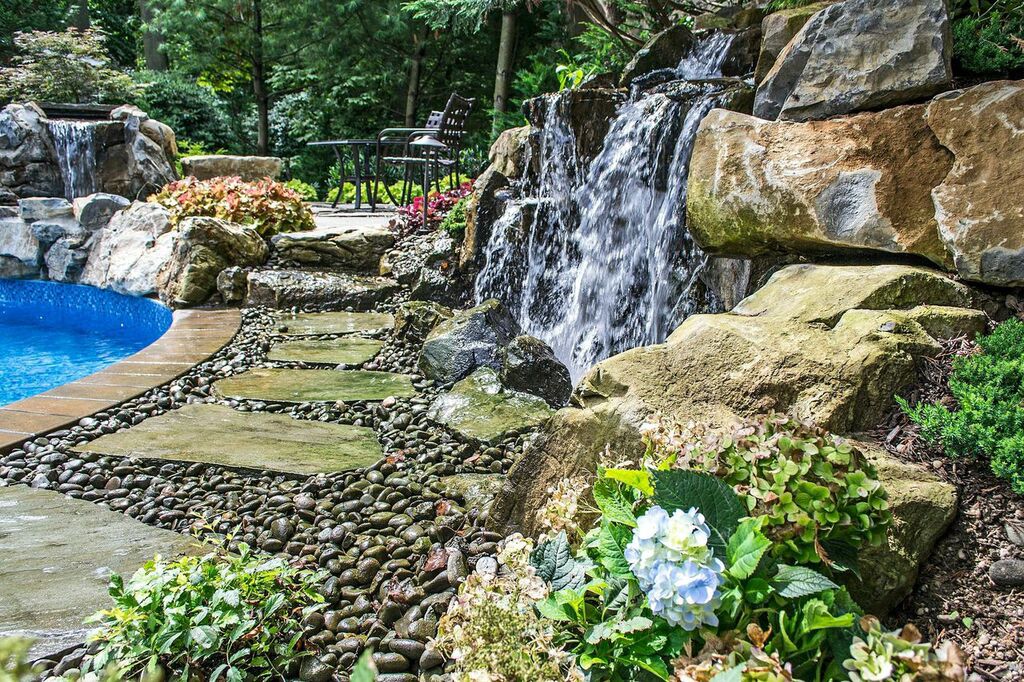 Not far from the right edge of the pool, Deck and Patio built a 19-foot natural moss rock barrier with a “pondless” waterfall. A small upper patio sits between this attractively landscaped barrier and the project’s spillover spa with its own waterfall. 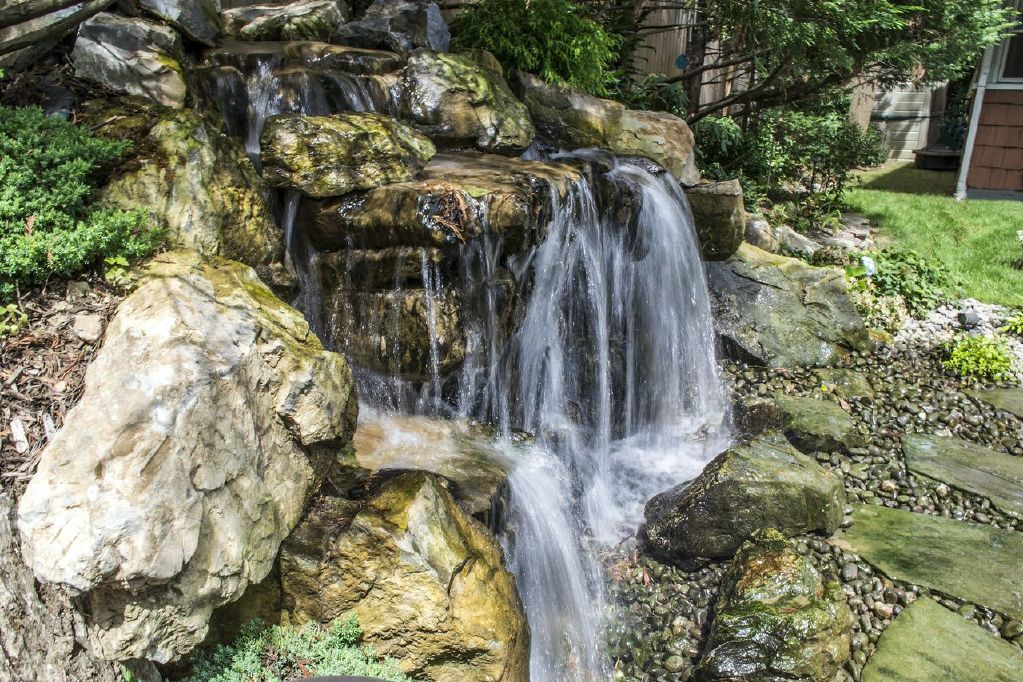 This is a close up of the Rosyln, NY main waterfall. Water flows down moss rocks in a natural-looking way, and seeps through river rock, where it is captured in an underground reservoir. The water is filtered and recirculated, making it very eco-friendly.

The following video lets you hear the delightful sounds of rushing water at this Rosyln, Long Island, NY, project. 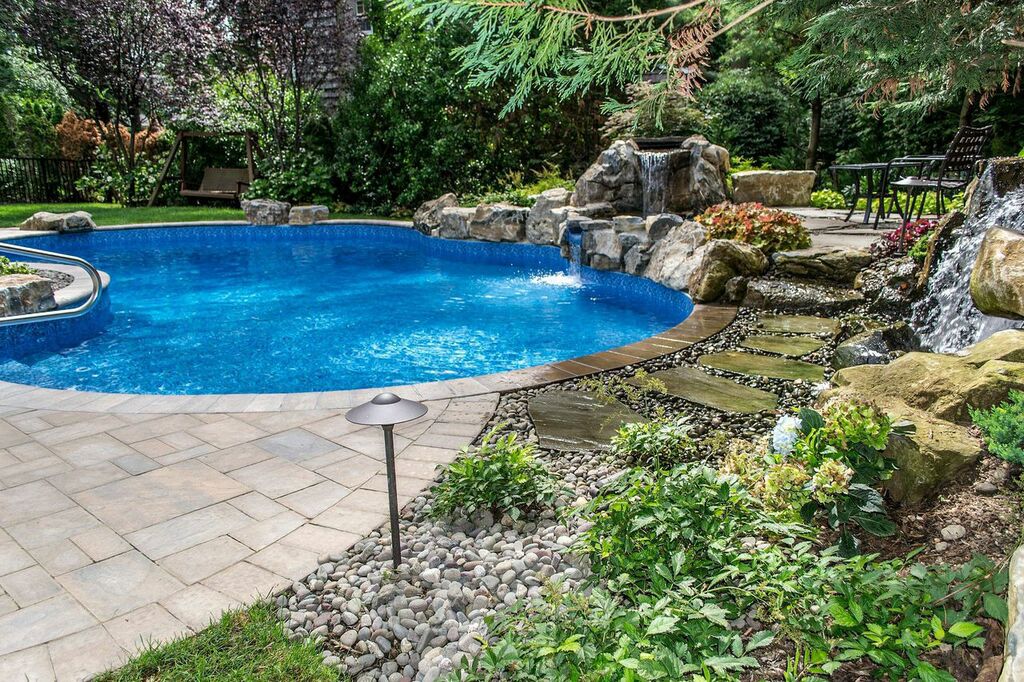 Pleasant sounds are the very opposite of unpleasant noise. And this backyard Roslyn, NY, paradise retreat is blessed with delightful sounds. These sounds can be enjoyed in the pool, while sunbathing on a wide patio, when relaxing in a quiet upper patio, when rocking back and forth in the outdoor swing — not to mention when relaxing in the spillover spa. 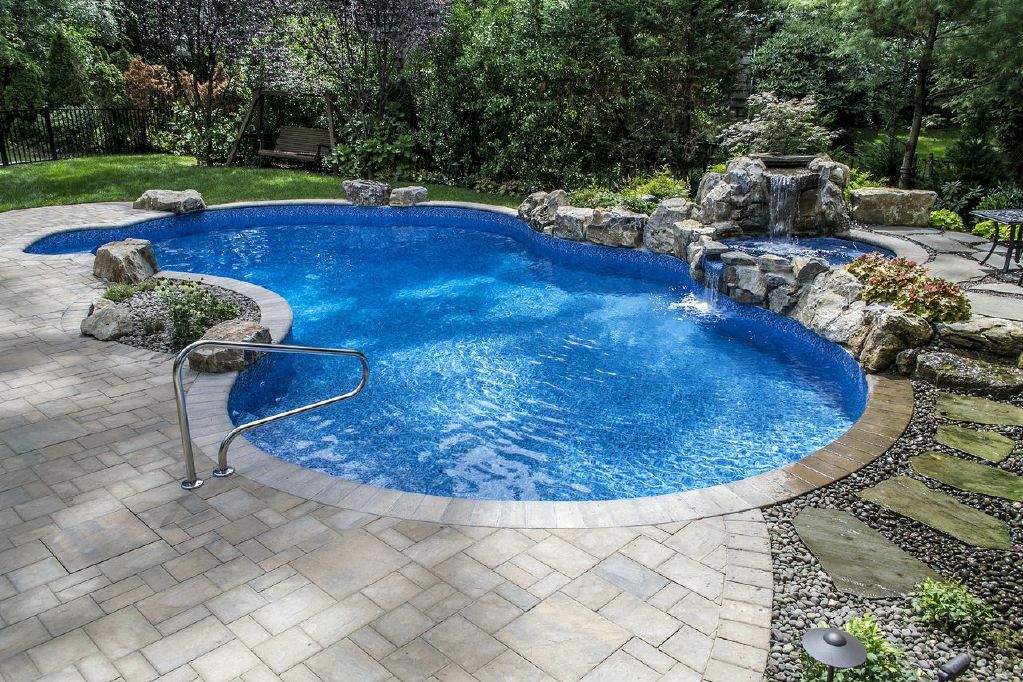 A diving rock and landscaping cutouts add to this pool area’s summer charms. In addition, the Cambridge Ledgestone IV Paving stones are tough when it comes to winter’s cold weather. The pavers seem to withstand abuse better than any poured and stenciled concrete. 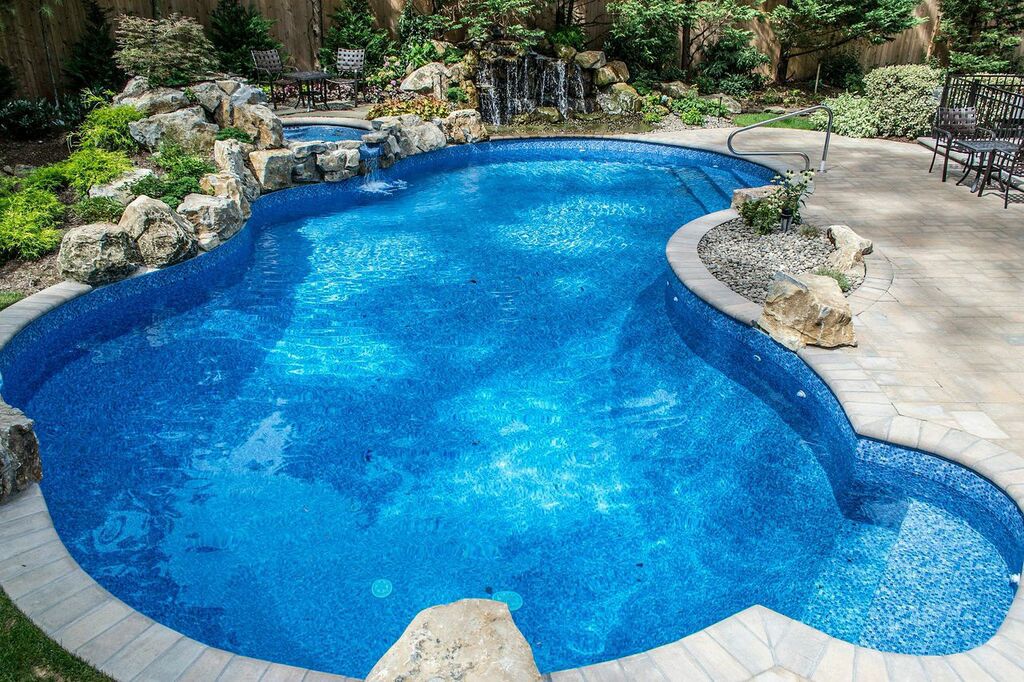