Backyard Upgrade: Having Your Own ‘Royal’ Pavilion 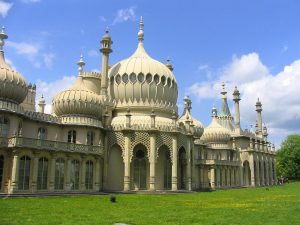 George IV and the Brighton Pavilion

King George IV of England had a love of beautiful architecture and built his grand “royal pavilion” over 200 years ago.

The King and his team spent a lot of time ensuring his pavilion was modern in its lighting, heating — even its kitchen. And while his majestic structure was more like a grand lodge than the pavilions most people enjoy today, his passion for handsome escape-architecture lingers on.

Here at home on Long Island, Deck and Patio has become known as a go-to design and build landscape firm for backyard structures such as pavilions.

“Property sizes and budgets may vary,” says our own Dave Stockwell, but our backyard structures can make our own Long Islanders feel a bit like royalty.”

For example, the following Deck and Patio dramatic shingle-roof pavilion with interior lighting also boasts two ceiling fans. Its columns rest on stone pillars that match the stone on the yard’s new steps. Note also how the roof shingles match those of the clients’ home. 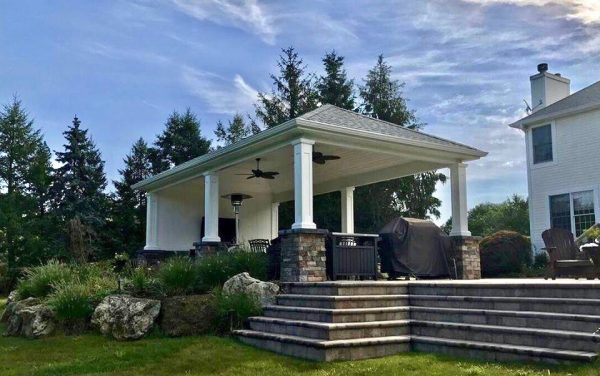 Backyard Pavilion with Ceiling Fans (Long Island/NY): Stately with lots of amenities for comfort, this pavilion is fit for a king.

Notice how there’s little doubt that these inhabitants like to entertain. One can easily imagine this as the perfect spot at any time — but it’s especially well designed for inviting over friends and family. 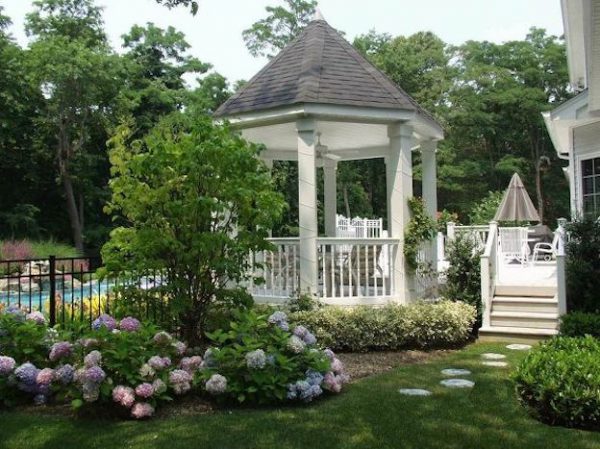 Outdoor Pavilions and Gazebos (Long Island/NY: This gazebo and deck is so romantic it might be fit for a royal wedding.

If you want to enjoy your outdoor space into the evening hours. you also have to think about lighting.

One way to handle this is with a closed roof. The following Deck and Patio shingle-roof pergola/pavilion with fireplace project was installed at the edge of a patio.

Lighted handsome columns on stone pillars match those of the pavilion’s custom fireplace.

The lighting on the pillars and inside the roof contribute to a perfect evening ambience. 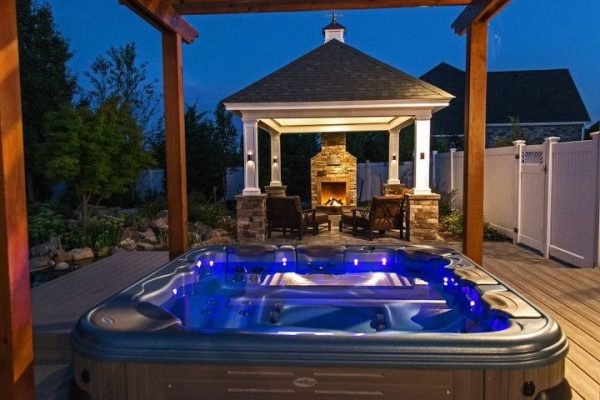 Pavilion Lighting: With such amenities that also include a hot tub, we think even King George would have been pleased.

Landscape Planning: ‘Before’ and ‘After’ Projects (Part II)

As we promised in last week’s blog, today we’re sharing additional ‘Before’ and ‘After’ design/build projects. We hope they inspire your own backyard upgrade.

These Dix Hills homeowners called on Deck and Patio when they decided to update their backyard pool area. Their old wood deck and red brick patios (above left) were small and unusable for parties and entertaining. They were looking for a complete plan to transform the space.

“We suggested a special idea to deal with the large wall behind the pool and small patio spaces,” says Dave Stockwell, owner of Deck and Patio. “The plan was to remove the wood retaining wall, re-grade the slope, and create a large natural waterfall, stream, and woodland garden (above right).”

Our design/build plan also called for draining the pool and removing the liner; a poorly built concrete block wall was uncovered and we straightened the wall and filled the block in with concrete and steal rebar for strength. New vinyl-covered stairs were added to the pool, plus new pipes, returns, skimmers, pump, filter and a new liner.

These Centerport, NY, homeowners were both outdoor enthusiasts with a property that had a nice water view. Their wish list included: an attractive modern-looking deck from where they could best appreciate their view; a deck/railing that did not in any way obstruct the view; and a conveniently placed portable spa.

An important choice for this Trex Deck project was the steel cable railing by Feeney does not obstruct the water views from any place on the deck. Deck and Patio built a custom spa “cradle” as a mount for their new hot tub. This positioned the spa so they could enjoy the views when inside the tub

Deck and Patio built this backyard ‘spool” (a cross between a spa and pool) several years ago. The homeowners decided on a ‘spool” for their yard  because they didn’t have room for a full-sized pool.

A spool would also allow them to enjoy it year-round. They could opt to run cool water in it during warm months, and hot water during cold months and cool evenings.

In addition, the mechanics of a spa provides the benefits of hydrotherapy massage — not to mention the amazing experience of sitting under flowing water from an added waterfall. A new fence was added for contrast and a bit of drama; a rushing stream flows through the large moss rock boulders to become a waterfall flowing into the spa. Lush plantings and a new patio completed their new backyard retreat.

So let it blast cold — or even snow. With a backyard ‘spool’ you can stay indoors or even go out and still be warm.

Landscape Planning: ‘Before’ and ‘After’ Projects (Part I)

Fall and winter on Long Island are great seasons to not just plan, but to design/build that backyard upgrade you’ve been wanting.

“The above project was for a Massapequa couple,” says Deck and Patio’s Dave Stockwell, “who longed to enjoy their backyard more  — which was tidy but not enticing as well as being on the small side.”

So instead of opting for a more expensive pool, the couple decided on a quality hot tub, with a custom in-ground installation.

“An in-ground installation makes a portable hot tub appear like it’s a custom-made spa,” says Dave.  “Plus it would make it easier for them to get in and out of the spa.

However, even though they knew they’d love spending time outdoors in their new hot tub, they also wanted something beautiful to look at while in it. They certainly did not want to be facing their home’s siding, or even just a plain line of healthy evergreens. They decided on koi pond with waterfalls next to the hot tub.

Upshot? The pond with waterfalls, hot tub installation and landscaping were still less expensive than a pool. And they love going outdoors now.

After purchasing a new home, the homeowner contacted us because the entrance he had to drive over each day, on his way to and from work, had not been kept up for many years.

He asked us to accentuate the property’s beautiful 1880 bridge structure with a man-made reflecting pond.

Our design allowed the pre-existing bridge’s entire stone gazebo to be reflected in the pond water. The water feature we designed and built is more than 240-feet-long and 60-feet-wide, so it also captures the surrounding landscape. Plus, such a wonderful expanse of water made the perfect habitat for koi.

Our team ensured the pond design included lots of flowing water, with rock overhangs, and plenty of space for pond fish to hide and thrive. Such a design makes it difficult for natural predators to reach the fish.

The stone bridge with turret creates a stunning pond reflection in its crystal clear water, doesn’t it?

We will have three more stunning projects next week. Watch this space!