Ever notice in old classic movies how distracting fake scenery looks outside, say, a car that actors are supposedly traveling in?

Well, that’s true in landscaping as well. Creating a serene outdoor scene that looks natural — like Mother Nature sculpted it — requires knowing what elements will make it appear genuine. 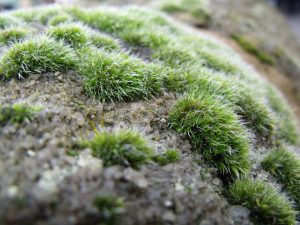 For example, whenever we design and build a new water feature or landscape wall, moss rock is always part of the design.

“Deck and Patio finds that these sandstone or flagstone rocks, with their red and brown undertones, provide the ‘mountain stream-woodsy appeal’ that is key to any natural looking water feature and surrounding landscaped garden,” says owner Dave Stockwell.

Moss grows well in shady areas, Dave adds. And along with ferns, it helps transform any backyard into a natural cool setting. “Of course, choosing the right size rocks and knowing where to position them is also key to creating a natural-looking scene.

Moss rocks are harvested from quarries nationwide; later moss is added. While the moss on the rocks do not flower, the initial planting reproduces through its tiny spores, absorbing water and nutrients through their foliage. The only requirement for healthy growth is the moist conditions derived from water features or other sources.

For our first project showcased below, Deck and Patio added tall grasses and evergreens like Juniper Parsoni, to complete the rich, lush, green backdrop to see. Coneflowers and Spirea Anthony Waterers help bring in the bright bursts of color. During winter months, the moss rock boulders themselves form breathtaking ice sculptures that extend enjoyment of the water feature. 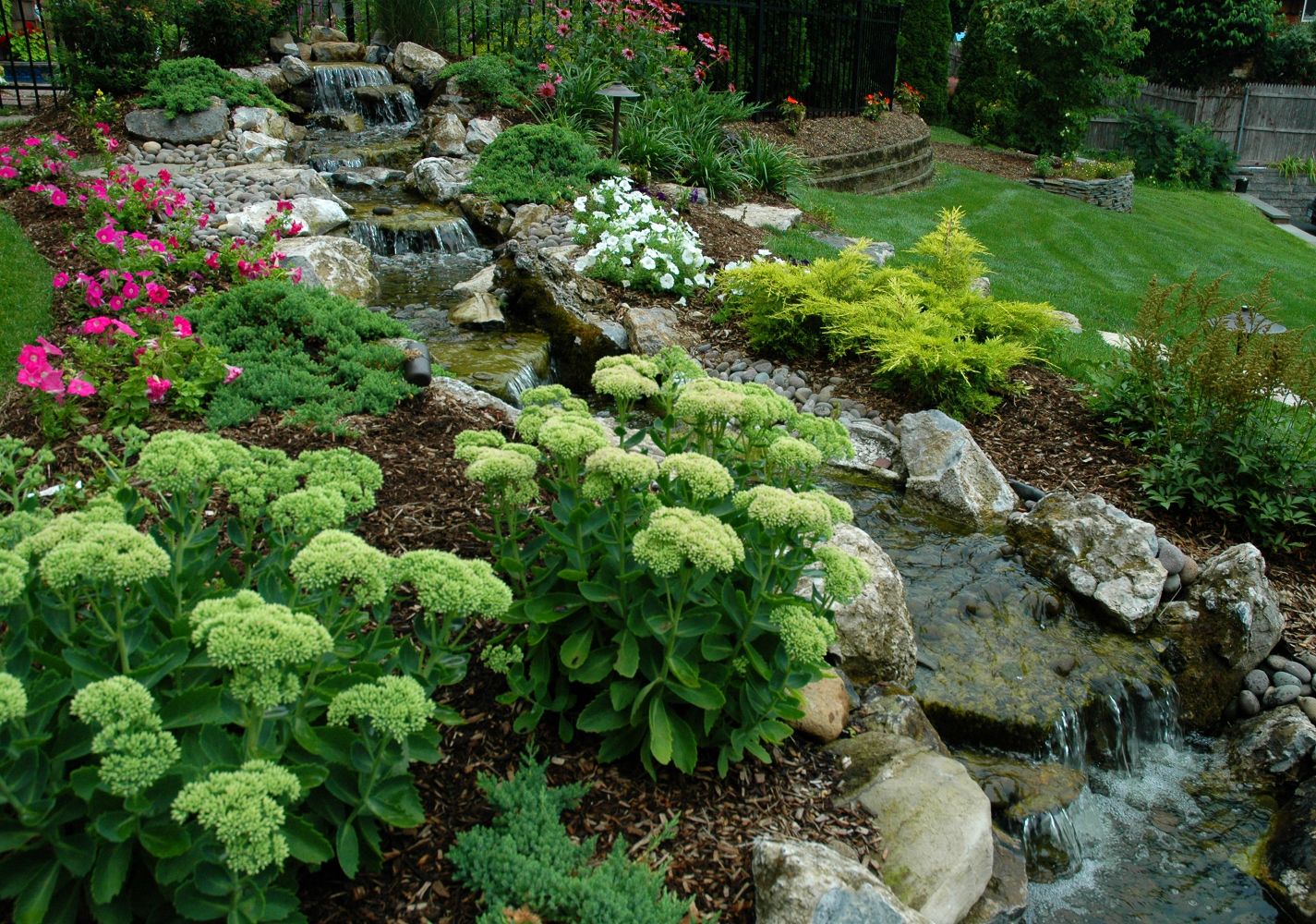 We designed and built this natural looking meandering watery trail and lined it with natural moss rock boulders and river stone gravel. Robust plantings along the stream also add to the natural look of it all. 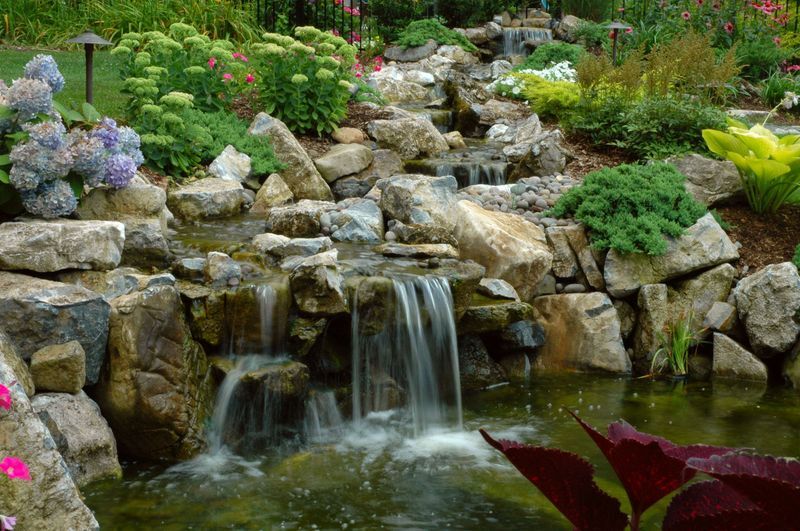 Each spill rock along this second backyard stream was carefully positioned to depict the most natural water movement. The stream flows down and over a 2-foot-by-2-foot-wide moss rock waterfall and cascades into a 10-foot-by-15-foot pond. It looks like it has always been there, part of the natural environment. 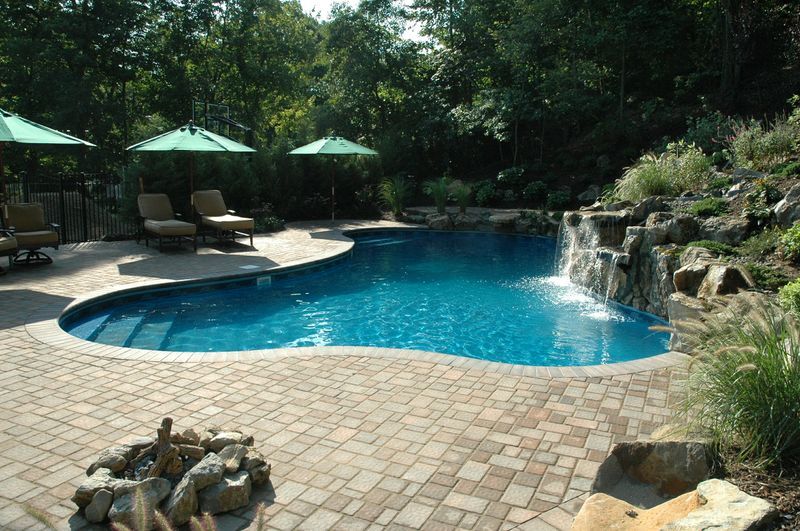 Natural Retaining Wall with Moss Rock: One of our outdoor living experts was called in by the pool company to design a pool surround positioned against a steep hill. Our design plan also included a large retaining wall made of natural elements like moss rock, a stream, a beautiful waterfall, and boulder pool coping — instead of constructing a less attractive wooden retaining wall. Overall, it looks like a natural stream created by Mother Nature meandering down a woodsy hill.(See also 2nd photo below) 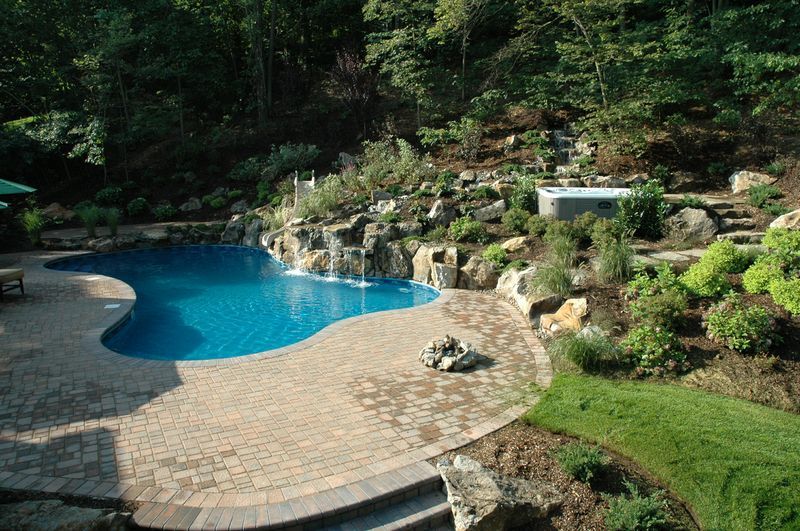 In addition (see immediate photo above), moss rock steps leading to a small blue stone patio became part of Deck and Patio’s overall design. Plus, a portable hot tub was installed on a flattened area in front of the patio.