Update (8-11-15): At their annual Pondemonium teaching event, a few days ago Aquascape Inc. awarded Bill Renter and The Deck and Patio Company “Conservationist of the Year” for this project!! We added a photo of Bill getting the “Top Frog” award immediately below. Note: This new award is above and beyond its earlier 2013 award. 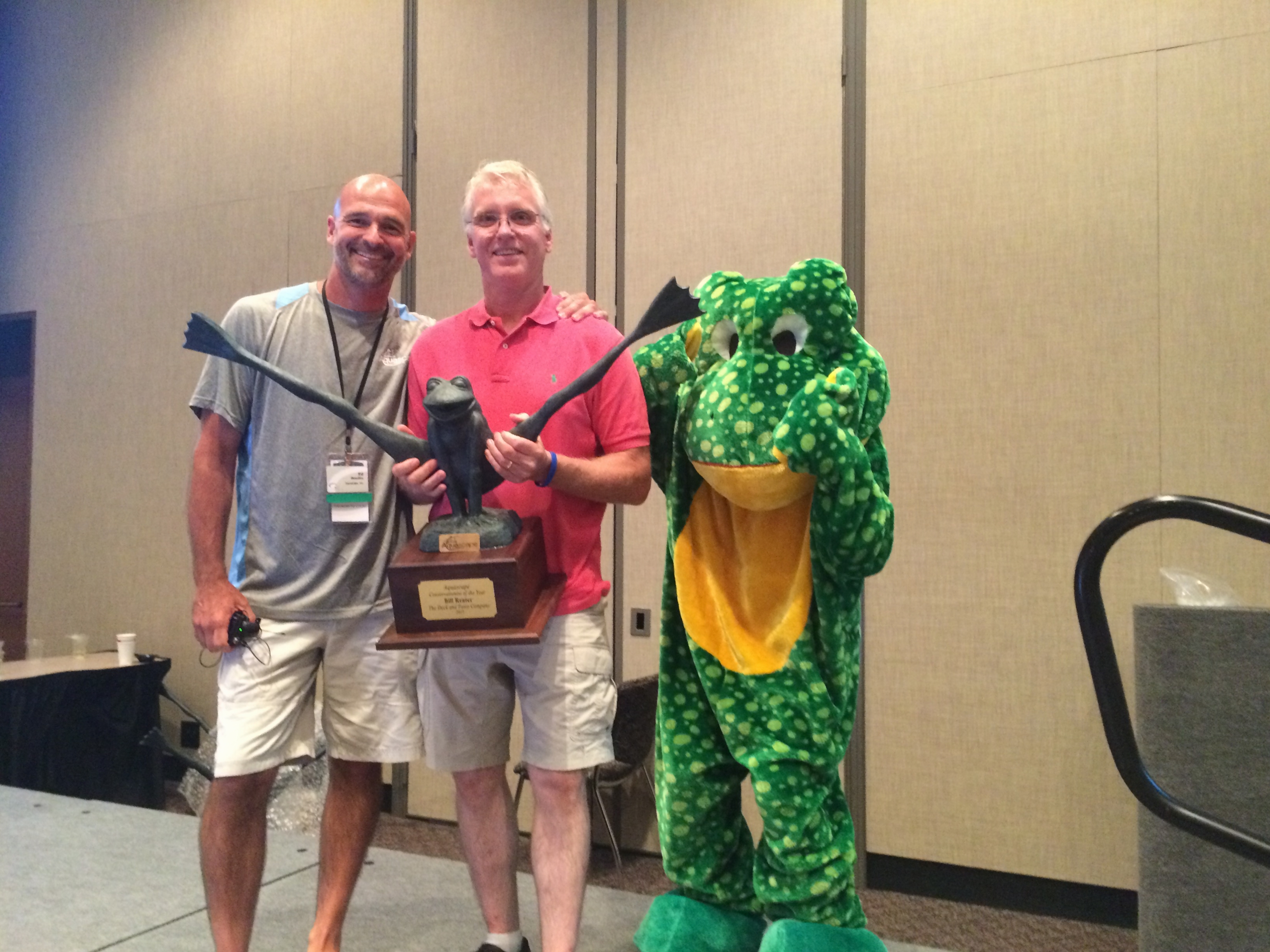 The sustainable division of The Deck and Patio Company — Rainwater Harvesting Group — recently won a prestigious award for a rainwater harvesting project at the LIRR station, in Huntington Station (NY).

“Rainwater harvesting is just what it sounds like,” says Deck and Patio owner, Bill Renter. “It’s a green method of capturing rainwater, which can be used at your residence or business for tasks that don’t require treated water: washing vehicles, lawn watering, washing a deck, or maintaining a garden or water feature. In this case, the project was for a public water feature at our local train station.”

It came about one day when Bill was engaged in a casual conversation with a few women who live nearby. They were planting flowers near the station to brighten it up. As the local landscaper for the area, he offered to help them by adding plants, flowers, shrubs and moss rocks.

“However, I learned at that time there was no immediate access to clean water. The women had been lugging five-gallon buckets of water from their condos to maintain the plants they put in. I thought there must be a way to help with that, too.

“First, we added some moisture retention product to the soil so less water was needed. Then I noticed there was no walkway beyond the small brick and cement sidewalk. There was only a dirt path. It was not handicap accessible and it seemed like the spot needed more than just plants and shrubs.”

After consulting with our Rainwater Harvesting Group, and gaining the support of the Town of Huntington, we installed a lovely water feature as well as a paver pathway for direct access from the curb to the parking lot.

We laid Techo-Bloc permeable pavers over gravel and a rubber liner. The gravel and liner filter the water runoff before it is sent to the reservoir we installed at the end of the stream in the water feature. The system we used is a RainXchange Harvesting System, produced by Aquascapes Inc.

“There is enough captured water to not only sustain the water feature, but to also irrigate all the plantings,” adds Bill. “Plus, this eco-friendly system keeps any non-filtered rainwater from going into the Town’s sewer system and on into Huntington Bay.”

This project has ignited interest in creating an entire rainwater harvesting park as part of the Town’s on-going revitalization of Huntington Station. Just recently, our company received a 2014 Bronze Award from Long Island Pool & Spa Association (LIPSA) for the feature.

Where once was only a dirt path from the sidewalk to the train parking lot, permeable pavers allow easy walking (arrow area pavers) while capturing and filtering rainwater for reuse. The pavers used are Techo-Bloc Victorien Permeable Pavers. 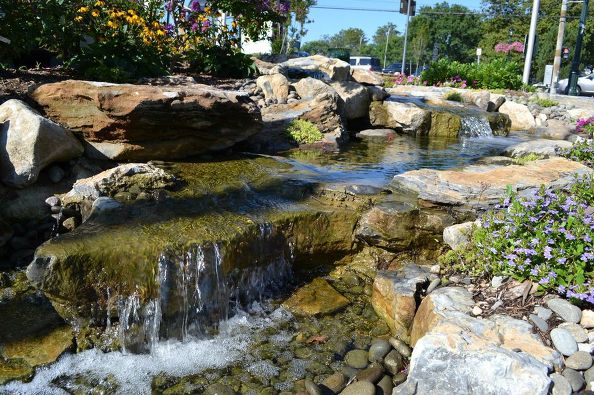 The water feature is not just for aesthetics, but it is highly functional. Its waterfall aerates the water — or oxygenates it. The water plants that our Rainwater Harvesting Group planted absorb nutrients and pollutants  to help purify the water. All together, the gravel, liner, and plants create a self-sustaining rainwater harvesting garden. The area is now a magnet for local birds who come here to bathe and drink. 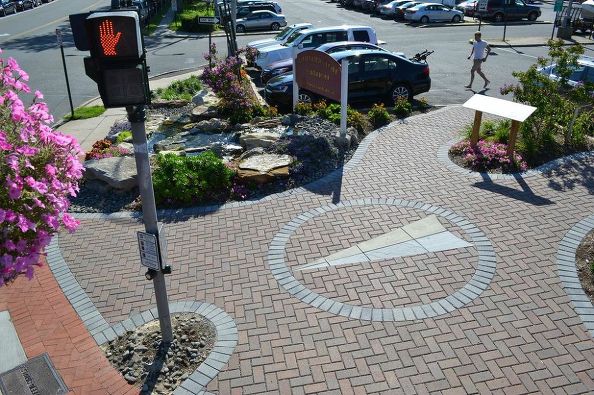 The RainXchange Harvesting Systems (produced by Aquascapes Inc.) includes an auxiliary pump connected to the irrigation system. This ensures that the water used isn’t city water, but harvested entirely from rainwater. The below ground Aquascape Aqua Blox Reservoir holds 500 gallons of rainwater. 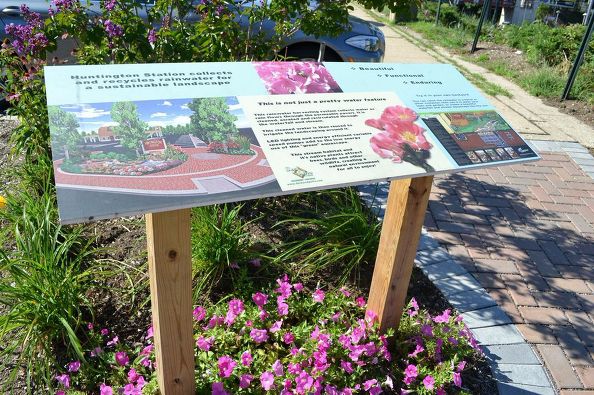 This project has ignited interest in creating an entire rainwater harvesting park as part of the Town’s revitalization of the area. In such a park, the rainwater would be harvested from different areas and sustain park streams, ponds, as well as irrigate the turf and plantings.