Creating a seamless integration of landscape, nature with architecture of house 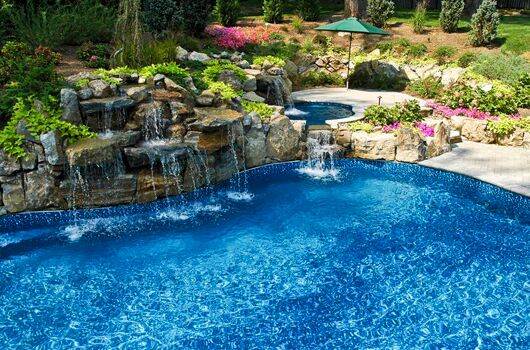 This backyard oasis garnered our firm two prestigious awards (Northeast Spa and Pool Association (NESPA) Gold Metal “Freeform Pools” and First Place for “Residential Concrete Pavers of more than 5,000 square feet” from Hardscape North America (HNA). We believe such accolades are partially due to our early collaboration with the architect and builder in the planning stages. Working hand-in-hand with them and the owners, both the home’s architecture and the outdoor landscape became one seamless integration. www.deckandpatio.com

As a design/build firm, we planned and executed the landscape’s seven-foot-high cascading waterfall, meandering stream with three-foot-high “sheetfalling” waterfall and two-foot-high spillway from a spa into the pool. In addition, the project’s patios and driveway, made of stunning natural earth-tone concrete tumbled pavers, were created by our outdoor living expert to appear as extensions of the geometric patterns and hues of the home’s Glen Gary brick; initial plans by the project’s architect for the house’s turret inspired us to create curves in the backyard’s multi-level terracing design as well as in the backyard’s centerpiece: a glorious freeform pool and spa.

In fact, the architect changed his own plans for the home’s turret so that views from inside the turret of our planned pool area oasis would be fully appreciated. In reference to this, the architect said, “Deck and Patio’s landscaping plan was so beautiful that the windows had to be larger to fully appreciate the view. Now, when you stand inside the bay of the turret, it is just like standing in the backyard.” 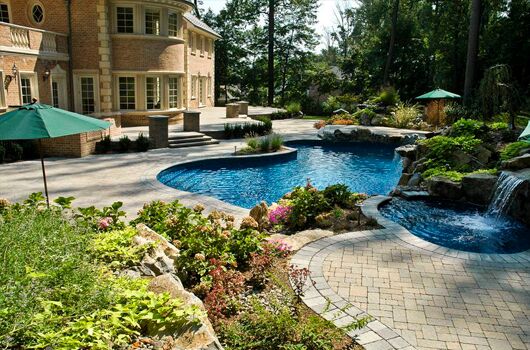 Our design and planning team also took into account what the view would be from inside the house. The ease of the back and forth collaboration between the parties was aided by Deck and Patio’s 3-D computer animation program “Pool Studio” which allows viewers to literally fly over and walk through a landscaping project as it is developing.

This 3-D program was also key in getting through some difficult permit processes. The Town involved has strict set back restrictions – meaning one can only build within a certain area of property or otherwise seek a variance  — a very lengthy process. These restrictions limit the amount of impervious surfaces such as driveways, patios, etc. that will retain water and cause run off.

This resulted in our creating 13 dry wells, some exceeding 70 feet in depth. This complicated our work as we dug beneath heavy clay soil in order to reach sandy soil that would allow the drainage. Being able to use our 3-D animation program before the Town’s architectural review board was an enormous help in explaining these detailed plans.

Our outdoor living expert noted that the Town board was in awe of what we showed them. It aided in getting the permit granted and is one of the reasons all our permits were approved in a fairly timely fashion. In the end, heavy equipment handled over 3,500 cubic yards of soil generated from excavating, grading, backfilling and contouring the site.

Other Town requirements forced the placing of the pool equipment in the middle of the backyard, which was directly in the line of sight when viewed from inside the front door and foyer. Because of our design, however, all this was hidden by an eight-foot-high pondless waterfall. 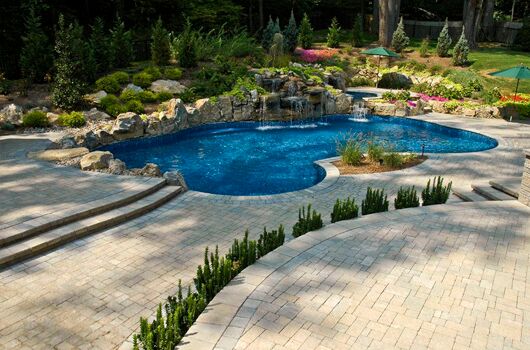 Our design includes an eight-foot-high pondless waterfall which hides pool equipment that local regulations required be put in the middle of the backyard.

The waterfall is powered by a 10,000 GPH pump and is center-lined on the main axis of the house, says Deck and Patio’s outdoor living expert. It creates an enjoyable audio-visual impact which runs virtually year-round.

More than half of the pool and spa beam is supported by over 30 tons of moss rock boulders. The spa and boulder work was specifically carved into the hillside to enhance a sense of enclosure and deal with the severity of the gradient change.

The project’s mature woodland setting has been surrounded by lush plantings in bright colors with long bloom periods. The landscape design also left ample lawn space for the homeowners’ children to play. 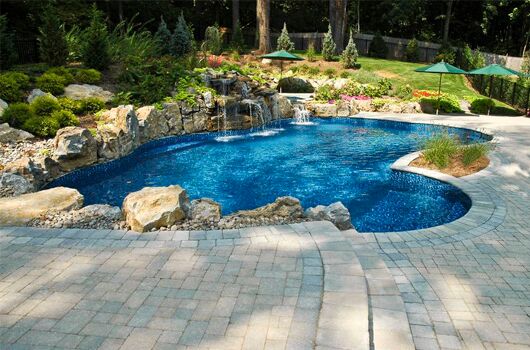 Mature woodland setting has been surrounded by lush plantings in bright colors with long bloom periods.

It was also noted by the publisher of the awards we garnered that our backyard design “makes the landscaping appear as though it is yielding to the concrete paver patios, pools and retaining walls” and that it “presents nature as in charge of the design, rather than the concrete.”

Beyond such official recognition, however, according the home’s owner, the public is speaking, too. When everything is blooming in front, the beautiful curb appeal continually causes people to stop – even on what is a fairly busy street. Stopping to enjoy what we did to the front yard, which we designed in a more formal way, they always ask if they can see the whole property. After they see the backyard retreat, we are told they are in awe of its beauty. 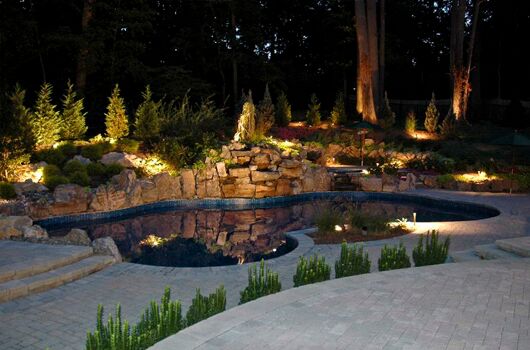 Boulder work, reflected so beautifully in the pool’s still water, enhances sense of enclosure while dealing with severity of property’s gradient change. 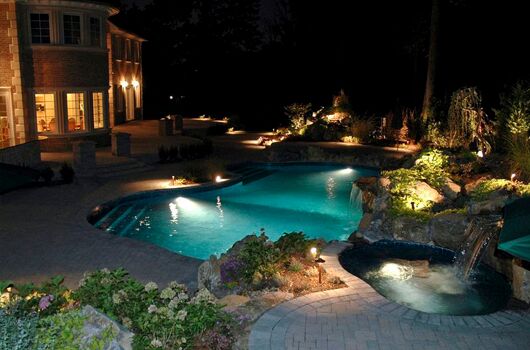